So, part one of my 4th of July weekend began with one of Chicago’s biggest annual reunions, The Chosen Few Old School Picnic. Also known as the “Black Woodstock”, the Chosen Few Picnic is one the most anticipated musical events of the summer. House Heads near and far, get up at the crack of dawn (like seriously out at 3am) to set up their tents, throw meat on the grill, and dance and socialize to endless hours of house music. The event is held on the south side of Chicago in Hayes Park and always takes place on July 4th weekend.  It started over 20 years ago as a small gathering and has now grown to thousands of attendees annually.  The event features world renowned guest DJs, live performances and, of course, the legendary Chosen Few DJs.

Now I’ve never considered myself to be a true “house head”, but I do love house music.  It’s a part of my generation and it is a part of Chicago. I remember when it originated and I am part of the generation that used to record mixes from WBMX to my cassette tapes.  I wasn’t old enough to go to the clubs, but I remember my older counterparts raving about the Warehouse, a house club hosted by world renowned and late house DJ pioneer Frankie Knuckles.  Overall, I suppose the event brings a certain feel of nostalgia. You get to listen to the music that saw you through puberty and reunite with old family and friends.  It’s peaceful and drama free. Everyone is there for the same purpose and common goal.

The Chosen Few picnic usually takes place July 4th weekend. Traditionally, it’s always been one day event, coupled with other pre-party and after party events.  But this year, they decided to make it a two day affair.  And as the event has grown over the years, so has the admission. For example, when I first attended five years ago, the cost was only $10 for general admission.  The cost this year was $34 for advanced purchase and $40 at the gate.  There is been a lot of controversy regarding the increasing cost.  Some attendees feel it’s completely justified and others feel the city is trying to take control of the event to generate another income stream. Either way, I think all of us can agree: it’s a damn good time. And I suspect that no matter how much admission goes up, loyal house heads will still be there. And I probably will be too.

I pledge allegiance to “the house”.

My lovely host and soror

Line to get in 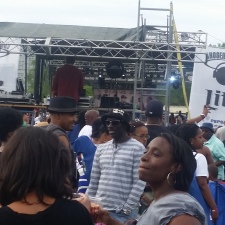